Okay, when I am researching and writing, I go for a big picture of how a family lived, where they lived and what they did. I can’t do it on this post but we do have some answers! Yay!

I have done a lot of research on my own but I also have this wonderful big book of answers that is a fabulous resource. It was written by Tommy Martinez (I guess at some point I should start calling him Tom, but I just think of him as Tommy) in 1989. 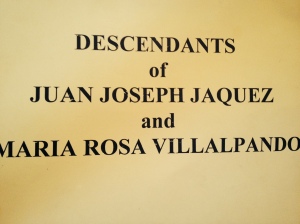 As you can see from the cover, it is the descendants of Juan Joseph Jaquez and Maria Rosa Villalpando. However, in this big book of wonderfulness there are over 2,600 names and it is a bit of a challenge just to comb the pages to figure out where we need to be and how the descendants are linked.

Back to the question at hand, who is Sam Jaquez and how is he related to us?

Therefore, we must start at the beginning.

Felipe de Jesus Segundo Jaquez – Born on 9/20/1795, his parents were Jose Julian Jaquez and Maria Paula Martin. To put this in perspective, his father Jose Julian is the only child of Maria Rosa Villalpando and Juan Joseph Jaquez to survive the Native American raid and likely grew up in the home of his grandfather,  Pablo Villalpando. It was Jose Julian who goes to St. Louis after he discovered his mother was still alive and wanting to marry trader Jean Sale dit Lajoie. Jose Julian was paid 200 pesos to relinquish his claim to Maria Rosa Villalpando’s estate.  (Side note, Jose Julian must have taken a wrong turn somewhere because the New Mexican authorities contacted the Spanish Administrators in San Antonio, Texas and suggested that Jose Julian be forced to return to his home as he had a wife and children without support in Ojo Caliente, NM.)

They married in 1817 in San Juan Pueblo, Rio Arriba.

To this union they had the following children:

The last child, Jose Julian Jaquez, only lived for one year and died in 1837. 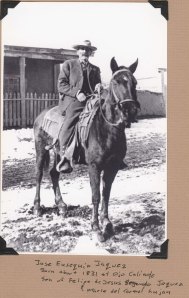 This is where our two families connect. Jose Eusequio (guy on horse) had a half brother by the name of Jose Ynes Jaquez. Same father (Felipe), but different mothers.

Then if we look at this half brother, Jose Ynes Jaquez, he married Maria de los Angeles Roybal in 1860.

Now Leonardo Jaquez is born in 1884 in Colorado

He marries Pablita Chavez and by 1910 they live in Blanco, NM.

Now I show them living together until the 1920 census. By 1920, Pabilita has remarried and had additional children. She is now 45 years old, married to Manuel Montoya and has 5 year old Sostenes (Tina) Montoya, 3 year old Casimiro Montoya and 1 year old Filix Montoya.

Samuel Jaquez married a woman by the name of Gregorita.

Yay! We’ve arrived at Leroy and his wife Jane Jaquez.

So, we (myself and my siblings) and Leroy Jaquez are 3rd cousins, 1 x removed.

This family looks like it was raised in the Blanco area as well, which makes sense why they would have a relationship with the Jaquez/Archuleta family that came from the Blanco area.

Easy, right? Okay, it wasn’t an easy path but we’ve made it. 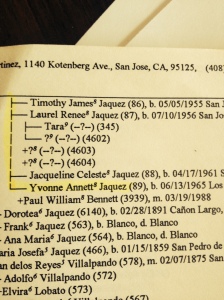 So, looking at this resource, we are missing at least two generations of descendants because if you look at just the page from my family the only grandchild listed is Tara Lynn O’Shea but in actuality (now) that is 16 additional people (all of my dad’s descendants). I think if this book were written today it would be close to 4,000 to 5,000 people. Now we know our connection to Leroy Jaquez.

Of course, our bigger connection is Maria Rosa Villalpando and Juan Joseph Jaquez. Two people over two hundred years ago started a life together that perhaps didn’t end the way they thought it would, but look what they created. They started a hell of a family.

Next up? I had a very nice email from a young lady by the name of Lisa Barrett who says she is a descendant of Maria Rosa Villalpando. Of course she is.