The oldest son of Juan N. and Ana Maria Jaquez, Uncle Bert (that’s what my dad called him) was born on August 5, 1880. I have wanted to add his story to my blog for some time but I couldn’t pin down details regarding him and it was driving me crazy. As you can see, Uncle Bert’s real name (at this point I’ll call it that) was Filberto Jaquez. Now, if I tell you the amount of hours I put into looking for him spelled only that way, you’ll think I’m batty. I found him on the 1910 and his name is listed as Filberto A. Jaquez. That letter A is important. So, Uncle Bert is second after Aunt Sara and just before Aunt Josephine.

When I decided to start looking at Uncle Bert several months ago, I thought a call to Henrietta Hayes was in order. As one of the last  two remaining people alive who would have known him, I thought she was the perfect person to ask.

One of the first things Aunt Henrietta told me was that Aunt Sara, Uncle Bert and Aunt Josephine all attended Carlisle Indian School. Now, I knew of Carlisle because some of my Native American ancestors on my mother’s side had attended that school and we found some really cool documents for them.

Uncle Bert attended Carlisle Indian School for five years. He was a football player and he played against Princeton and Yale Universities The players would call the Carlisle players “country hicks” as all the students were from the country.

Carlisle Indian School would “outsource” their students so every student lived with a family in the Carlisle, Pennsylvania area.

Of course, the most famous Carlisle Indian student was Jim Thorpe.

In 1907 Bert Jaquez married Virginia Duran. Their first child was Margarite Jaquez born in 1908, the next was Fred Jaquez born in 1909 and the rest of their children were Ann, Millie, Patty, Cristobal, Leonard and Teddy.

As you can see in this picture, Uncle Bert is the third person to the left, Virginia next to him holding a baby. I think the little girl in the white dress is clearly their daughter (she looks just like her mother lol).

Uncle Bert’s oldest daughter, Ann Jaquez became Ann Latham. She lived in Hollywood, CA and was a fabulous cook for movie stars. When the depression hit, she went to work for the Sheriff’s office in Los Angeles.

Now, don’t hold these next words against me. I did not say them. I didn’t even think them. However, when I asked Aunt Henrietta to describe Uncle Bert’s personality, she said he was a “Goldbricker.”

I laughed. She asked if I knew what that meant. I said no, I have never heard of that term. She said, “Well, you’ll have to look it up.”

Here is the definition. “Goldbricking…To loaf or goof around on the job. Supposedly an old union term describing laborers (or more specifically, bricklayers) who were going so slow.

Now, that I did find funny.

She also said he ran a blacksmith shop and a shoe shop. But his main source of income was sheep ranching. Like his father and his father’s father, he was a sheep rancher. 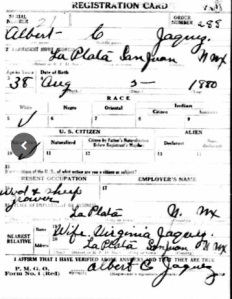 Now, here we circle back to the name issue. This is the WWI draft card filled out for Albert C. Jaquez. Shows him born August 5, 1880, had a wife named Virginia and he was a wool and sheep grower.  So, one of the things that stopped me from adding Uncle Bert to this blog was I couldn’t find when he died. I thought, well, this is ridiculous. I have a ton of pictures of him. I know a lot about him. What the heck? So I had some across some Ancestry.com hints that showed A.C. Jaquez and I was like, no, that can’t be him. (I always think I know better.) However, I started searching again and decided to take a good look at the A.C. Jaquez hints. It always showed the spouse as Virginia (check). Also showed that they lived in Southern California in later years (where daughter Ann lived, check). Also showed the same birthdate for Uncle Bert (although there is always some discrepancy with the date, whether it was 1880 or 1881. 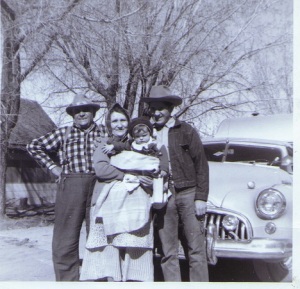 Uncle Bert, Aunt Virginia and their son and grandbaby

Uncle Bert on the far right 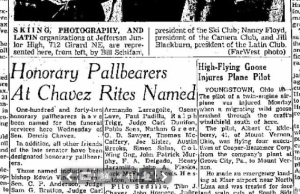 I finally decided to call the mortuary where A.C. Jaquez was buried. I asked the clerk if she could tell me what his name is listed on their records. She said that the plot was owned by A.C. Jaquez but that Filiberto Jaquez was buried there. So, either Uncle Bert went by A.C. or it was owned by Ann Jaquez or some other mystery but it seems reasonable that it is in fact his grave.

It appears that Filberto Jaquez died on November 22, 1963. I am going to try ordering his death certificate so I can have confirmation.