After our Santa Clara home sold, we lived for a brief time on Sioux Lane and then moved to our next home at 6027 Sylvaner Way in San Jose. Today, that home is valued at $1,446,000 but back in the 1970’s it was a just a lovely home in a new subdivision. It was a single block off Almaden Expressway and the streets that surrounded it were Zinfandel, Rhinecastle and McAbee.

Camille had moved out with her friends, Susie and Annie Ellis for a brief period of time, but by 1973, she was married to David O’Brien.

When we first moved to Sylvaner, Tim was just graduating from high school and then he took off for Europe to go backpacking with his friends, Rainey and Christie. Laurie had a bedroom there too, but in short order, both she and Tim had moved out and the only ones left living at home were Jackie and myself.

It is important to stop for a minute and reflect on my mother’s health.  Her physical health was greatly impacted by a single event that took place in 1968. She had been working for Lockeheed Electronics when she fell down a flight of stairs, damaging her shoulder and breaking her back. She suffered great pain and for most of my childhood, my mother was either in the hospital, just getting out of the hospital or simply in pain. She eventually had five back surgeries, a knee replacement, and rotator cuff surgery. She suffered from debilitating migraines as well and physically her pain never ceased. However, my mother was the single most optimistic person I knew. She would be in devastating pain physically, but she’d plaster a smile on her face, sing a song and just be the nicest person around. She loved dancing with Tim. On Sunday mornings, they would get the newspaper and read it in bed. We would eventually find our way into their bedroom because we loved hearing my mom and dad talk about everything. It was so wonderful to listen to their conversations that everyone would end up in the same place. We’d climb into their bed and just chat up a storm and laugh. Eventually, mother would head to the kitchen and start breakfast. She’d make eggs and fried potatoes, but the crème de la crème were her biscuits. She made homemade biscuits that were simply heavenly.

Dad would come in to help her and she’d turn on her favorite music, usually a Frank Sinatra tune. She always wanted to dance with my dad, and even though she knew her back and leg would suffer, she just couldn’t resist. They really did have a great love for each other. It was a fun way to grow up. 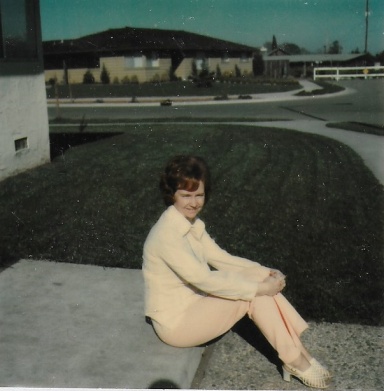 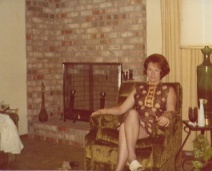 Because the “big kids” had married or moved out, Jackie and I spent a great deal of time with our parents. In 1974, they took us on a road trip to Oregon, Washington, Idaho, Montana and Wyoming and we visited Expo 74’, the World’s Fair. This took place in Spokane, Washington. We had a fun trip.

We also visited the 1976 American Freedom Train. It was a train that pulled into San Jose and it was filled with American Memorabilia. This included George Washington’s copy of the Constitution, Martin Luther King’s pulpit, a rock from the moon and the one item that impressed me the most, Judy Garland’s dress from the Wizard of Oz. This was such a cool event.

About this same time, Marriott’s Great America was opened in Santa Clara. We also visited this upon their opening as a family, including the big kids. This was the only time I ever rode a roller coaster, as my brother in-law David made me ride Willard’s Whizzer. By the way, there were no seatbelts nor bars, only the force of the ride kept you in the seat. There was a fatal accident on this train and it was eventually taken down. Scary to think about it now haha.

By 1977, Laurie was married to Brian O’Shea and she was pregnant with Tara Lynn. My parents were elated about their first grandchild.

We also had a dog by the name of Muffin. Mother said she looked like a ragamuffin when she was brought home and so that was what we called her. She was pregnant at the same time as Laurie. Muffin was a very intelligent poodle/terrier mix. She wasn’t allowed down the hall in our bedrooms and was to stay in the family room. Muffin would sneak down the hall to my bedroom, snatch up a Barbie Doll and chew her feet off. I lost a lot of my dolls like that.

In the spring of 1977, Mom and Dad took me and Jackie on another trip. This time, we drove to my Aunt Fran and Uncle Don’s home in Florida. The Jones’ were friends that my parents made in Santa Clara. They would play cards together and just have the best time. My mother was a little older than Aunt Fran, so mother took Aunt Fran under her wing. They had started out as friends with Uncle Ron, Uncle Don’s brother, and his wife Aunt Bonnie. Our families grew up together and felt like family. We drove from CA to Arizona, New Mexico and Texas. Dad did the driving. The first day he drove all day and night, then we stopped by noon the next day. After that, we headed to Alabama and had a chance to visit my Uncle Bryan and Aunt Lillie in Birmingham. He was my mother’s uncle and she was very close to him. We also got the opportunity to meet Uncle Tom, my grandfather’s other brother.

Afterward, we drove out of Alabama, just ahead of a tornado. The sky was very black and quite frightening. We pulled into Pensacola, Florida in the afternoon. After securing a hotel, we drove around to see the town and have dinner. The entire town was closed. We couldn’t find anything open. We finally got back to our hotel and found that they were on a hurricane warning. That was scary too. The next day, we arrived in Titusville. We stayed at Aunt Fran and Uncle Don’s for several days. We visited the Glass Bottom Boats and the Kennedy Space Center. We also visited Uncle Ron and Aunt Bonnie and when we left Florida, we stopped to visit Uncle Don’s parents in Georgia.

On the way home, we drove through Memphis, TN but my dad refused to stop at Graceland, Elvis Presley’s Estate. I still hope to get there one day haha.

Jackie at the Atlantic Ocean 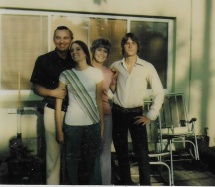 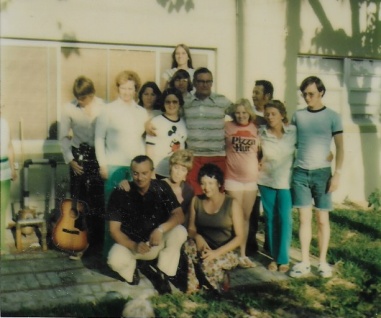 We drove back across the US and ended our trip in Las Vegas. We stayed in a two-room suite and we went to a dinner show and saw Dean Martin. He put on a great show. We spent Jackie’s 16th birthday in Las Vegas.

When we arrived home, our dog Muffin had a litter of 9 pups. That is a big litter for such a small dog. A couple months later, Laurie had her first baby. My dad thought she should name her baby Tara Linda because he liked the name Linda, but she was named Tara Lynn. My parents were so thrilled with that new baby. A short seven months later, they had their first grandson as well. Cammie had her first baby, James Matthew, in 1978 and by 1979, Laurie had her next baby, Edward Allen.

As the 1970’s came to a close, my parents’ lives were filled with their grandchildren. But they were itching to move out of San Jose. The traffic was getting worse and they really wanted to return to Stockton, the town where they had met. Our parents sold our home and in November of 1978, we moved to Stockton. Jackie wasn’t pleased to be moving in the middle of her Senior year of high school. She stayed with a friend for the last month of school then joined us at Christmas. She graduated from Lincoln High in June of 1979. My parents were pleased to be back in Stockton. My Grandma Flora’s health was getting worse as the 1970’s ended and she, too, moved back to Stockton. As we close the 1970’s decade, my parents were relatively healthy, certainly happy and busy with parents, children and grandchildren. But as always, Tim and Jubie’s great love was the cornerstone of our family.