Back in 2008, long before this blog came about, I was contacted by a woman by the name of Angie Hampt, who said she was searching for information regarding some people on my family tree. There were several names that repeat on my tree, all interconnected families. Those surnames are Cox (Cocks), Dillard, Goad, and Shockley. These families were mid-west families and all of these ancestors stem from Rutha Cox Burgess, mother of Henry Carter Burgess, my great-grandfather.

Let’s start with Joshua Cox (Cocks).
Joshua was born on January 15, 1799 in Montgomery, Virginia to Mary Dillard Cox and William Cox. Mary D. Dillard, Joshua’s mother, was born to Thomas Dillard and Ruth Goad around 1770 in the state of Virginia. The Dillard and Goad names are both integral to this story but let’s stick with Joshua’s roots. Mary Dillard was married to William Cox who was born on May 24, 1770 in Carroll County, Virginia. They were both born just prior to the American Revolution. They were married in 1797 in Virginia. His will included the children Joshua Cocks, Reuben Cocks, Thomas Cocks, Andrew Cocks, Henry Cocks, and daughter Rebecca Cocks.
You will notice that I’ve changed the spelling now to Cocks. By the time Joshua is being spoken of in records, the name is spelled as Cox. However, it appears that William spelled his name Cocks. His will was dated August 23, 1814, which would have made him 44 years old when he died. Yikes!
Researching William has not been easy. I did find a link on a genealogy website that shows a possible spelling for William’s last name as Cocke. The spelling differences drive me crazy. Looks like there was a John Cock who was married to Elizabeth Goad and Thomas Dillard who married Elizabeth Goad’s sister, Ruth Goad. Both Elizabeth and Ruth were daughters of Abraham Goad. We’ll delve into Abraham Goad later but for now, it seems plausible. So, possible parents for William are John Cock and Elizabeth Goad Cock. However, I also found a possible parentage of John Cock and Nancy (Unknown maiden name).
William and Mary D. Cox lived in Virginia then settled in White County, Tennessee, which is where he dies in 1814. Mary sold their land in Tennessee and moved with her four teenage sons to Gasconade County, Missouri. She was 44 years old.

In the name of God Amen,  This Twenty Third day of August in this year of our Lord God, One Thousand Eight Hundred and Fourteen.  I William Cocks of White County and State of Tennessee, being very sick and weak in body, but of required mind and memory, thanks again unto God. Therefor calling unto mind the mortality of my body and knowing that it is appointed for all men once to die, do make and ordain this my last will and testament.  That is to say and first of all I give and recommend my love into the hand of God that gave it and for my body , I recommend it to this earth to be buried in a Christian like and decent manner at the direction of my Executors not douthin but at the general Resurrection,  I shall receive the same again by the mighty power of God, and touching such worldly estate.  Where with it has pleased God to help me in this life, I give , divide and dispose my debts and funeral expenses.  I give to my wife Mary Cocks one third of m y estate both Real and Personal for during the term of her natural life and after her decease.  I give the same to my children herein after named,  my loving sons, Joshua Cocks, Rueben Cocks, Thomas Cocks, Andrew Cocks, Henry Cocks, and my daughter Rebekah Cocks, William Cocks, and John Cocks also and equal division among them and to be enjoyed by them as they come of age and their heirs forever by my executors whom I appoint.

I likewise ordain and constitute my wife Mary Cocks and John Duly and Peter Carter, Executors of this my last Will and Testament, hereby revoking all other former wills or testaments by me heretofore made in writing whereof I have here unto set my hand and seal, day and year above written.

Signed, sealed, probated and delivered and declared to be the last will and testament of William Cocks, White County, October, Tennessee.

In the name and in the fear of God, I, Mary Cox of the County of Gasconade in the State of Missouri, being of sound mind and deposing memory do make and publish this my last will and testament in manner and form following that is to say – First it is my will that all of my just debts and my funeral expenses be fully paid as soon after my decease as possible out of the first moneys that should come into the hands of my Executor from any portion of my estate, real or personal.

Second — It is my will that at my decease, a full and fair evaluation of all my Estate both personal, real or mised, except my colored man Berry, be made and an equal division of the same be made among my heirs, namely, Joshua Cox, Rueben Cox, Thomas Cox, Andrew Cox, William Cox, and Rebecca Shockley, deceased.

Fourth — It is my will that my Servant, Berry, a collored man at my decease be free and that my Executor after my decease see that he has his freedom together with what little property is known to be his and that if any expense necessary occurs in making him free according to the Laws of this State that the same be paid out of the property known to belong to Berry.

In Testimony whereof, I have here with set  my Hand and Seal this 29th day of August A.D. 1846

As you can see, looks like Mary had one slave that traveled with her and helped her. Since it was her desire that he be free at her death, any debts he had be paid by her estate, and that he have his property, it seems to me that he felt like much more than just a “slave”.
Joshua Cox was listed as her executor. So, Joshua was one of the teenage boys who traveled with his mother in 1814 to Gasconade County, Missouri.
Joshua married Sarah Shockley Cox. Sarah was born in 1797. Her parents were Isiah and Ruth Shockley. According to the Gasconade Historical Society, Thomas Shockley built his home on a bluff overlooking the Gasconade River, which became known as Shockley Bluff. Thomas was likely a brother to Sarah. 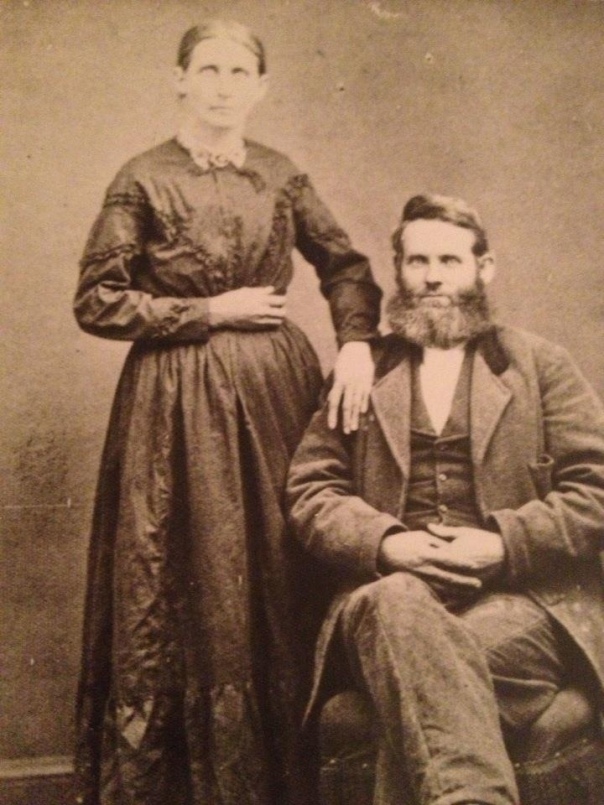 I love this picture that I found online of Andrew Cox and Mary Ann Burgess because we are related to both of them. Great picture and here is one more:

Andrew Cox and Mary Ann Burgess had 10 children, all first cousins to the Burgess clan. Andrew was known as “Uncle Andy” in his region and was a Baptist Minister…yeah, he kinda looks like one.
According to the Gasconade County Courthouse, “Volume A of the County Court Record indicates that the court planned a one-story, 22-foot-square, hewn-log building; however Goodspeed’s History of Franklin, Jefferson, Washington, Crawford and Gasconade Counties of 1886 describes a 20-by-24 foot, log, two-story building on stone foundation, with a stone chimney and two fireplaces. The courtroom was on the first floor. Joshua Cox contracted the building for about $300.”

Joshua was a Justice of the Peace for 1834, 1835, 1839 and 1840 in Gasconade County.
Joshua Cox died in 1867 in Gentry County, Missouri at the age of 68. His wife Sarah Shockley Cox died in 1846, 21 years before her husband. I do show a possible second spouse for Joshua Cox by the name of Mary McNatt of Tennessee but I have not confirmed that information.

Going back to Angie Hampt, she was descended from Rebecca Cox Shockley. Rebecca was a sister to Joshua Cox. Rebecca is the person who must have died in childbirth or shortly thereafter as she died in 1829. She was married to Uriah Shockley. Here is a map of the properties that he owned in Gasconade County.

The child that Rebecca Cox Shockley had shortly before her own death was Rebecca Shockley Haynes. Rebecca Haynes’ daughter was Minerva Haynes Crider, who married Samuel Dallas Crider. This is their picture 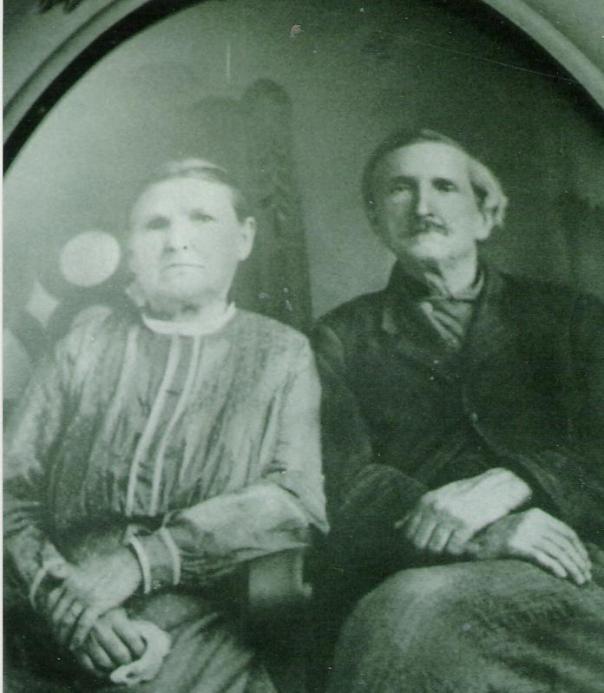 Angie Hampt was descended from Minerva Crider and was looking for photographs of either Rebecca Shockley Haynes or Rebecca Cox Shockley. If anyone has these photographs, please feel free to let us know.

Sorry for the long delay in this post. The kids are back in school, a regular routine back in place, boy bands have been watched and my exercise schedule have all contributed to my time crunch. However, research always continues to capture my thoughts, even when I don’t get to post.

Jose Ramon is a full brother to Juan N. Jaquez (my great-grandfather) and we are so fortunate that Lisa Barrett has shared some of the pictures she has of her ancestors. 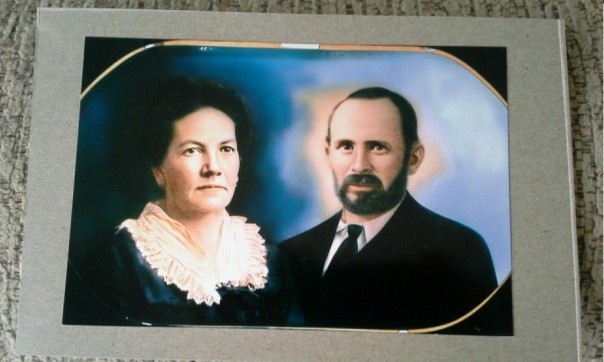 I had a copy of this picture already on the disc that Tommy gave me, but I didn’t know who they were. It turns out it was a great picture of Jose Ramon and his wife Trinidad Munoz.

This is such a nice picture of Ramon Jaquez’ family.

Trinidad Jaquez with her young daughter Trinny who passed away at the age of 16 along with the baby on her lap, Eugenio,  who is Lisa Barrett’s grandfather. 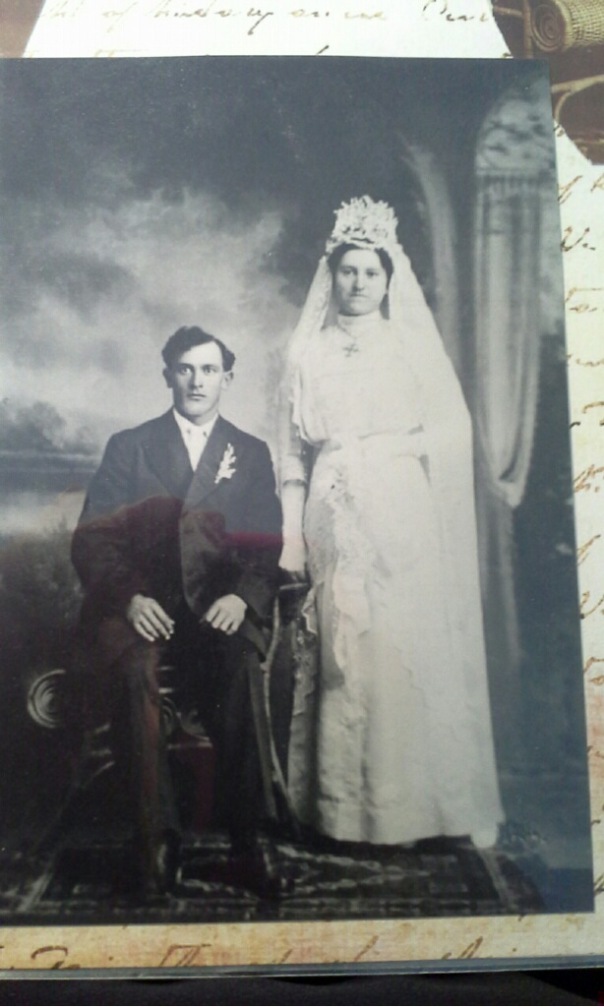 Longino Jaquez and Francisquita’s wedding photograph, September 2, 1914. He is the son of Ramon Jaquez.

The young lady on the far left is Francisquita Jaquez, teaching school in El Rito, NM.

I am working on a Benjamin Marshall post (the Native American). I am working on a post on three families that had some American Revolutionary ties including the Goads, Dillards, Cox (Cocks), and Shockley families. All three families are related to the Burgess clan. I am also working on a future post about my mother in law’s family line, the Bailey family.I am doing all of this while I continue to research how all of our Jaquez family ties include a Lujan and how they relate to each other.

If anyone has a question or comment, please feel free to contact me here or on my email address at