Dorothy Saiz started out as Rosa Dorotea Jacques but god forbid you called her that. She wasn’t a fan of her first name. Aunt Dorothy was the third from the youngest, just above my dad Tim in age. She was born November 3, 1920 in Cuba, New Mexico, seven years before Tim.

Dorothy didn’t like school because the family would move often and she’d have to start at a new school. She could read well but could not do math.

When the family came to California, they all took the train except for Aunt Dorothy as she drove with her father to cook for the men.

Aunt Dorothy is second from the left, about 15 years old here.

She looks about 18 years old here. 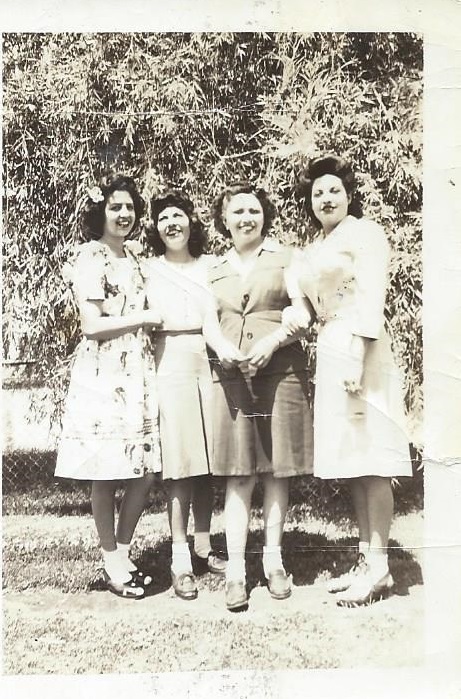 Aunt Dorothy is third from the left in this shot.

One of her school mates was Tak Miyasaki and his brother Sam. They started life as Isami and Takeasi Miyasaki. 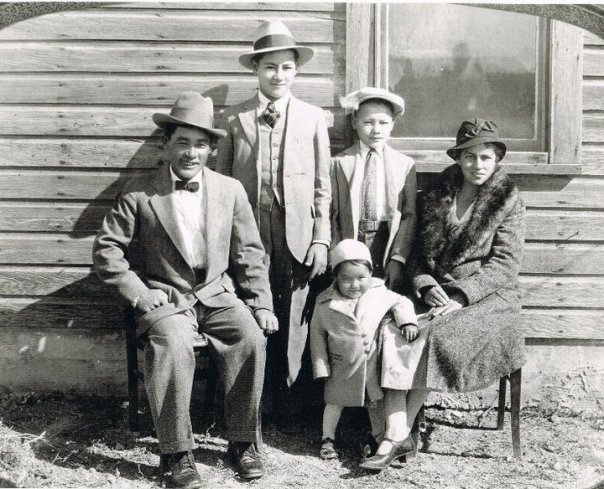 Their father was James Miyasaki and their mother Margaret Saiz. James was born in Japan and immigrated to the U.S. in 1898.  Margaret was born in Colorado and she was Spanish.  Here is the Miyasaki family in 1930 when they were living in Colorado. He was listed as a farmer.

Isami became Sam and he met Dorothy when they lived  near (Sharon thinks it may have been the same building) the Jacques family. They began dating and married on January 12, 1939. Since it was illegal for them to be wed in California, they went to Reno, Nevada and had a reception upon their return. 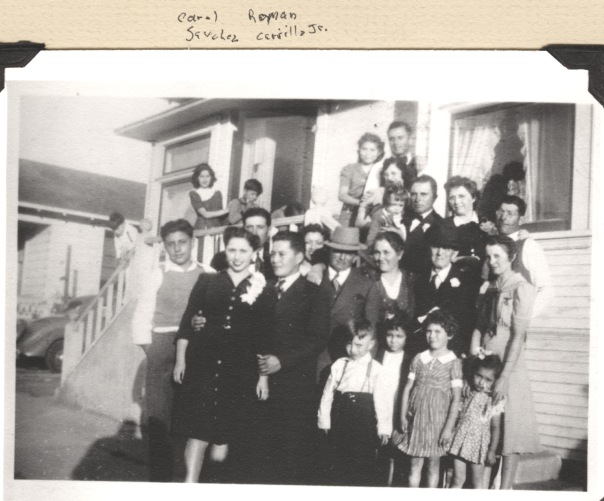 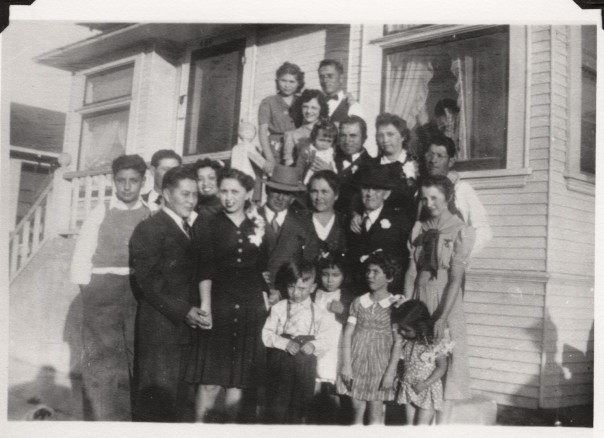 Here is a photograph of them after their wedding. As you can see, all of her siblings were present along with Aunt Celia and Grandpa Juan N. Jacques.

In October of 1939, James Miyasaki, Uncle Sam’s father, passed away and was buried in Stockton.

My cousin Jeanie was born on April 16, 1940. She was named Dorothy Jean, and was called Jeanne after Jeanne Crane, a movie star. 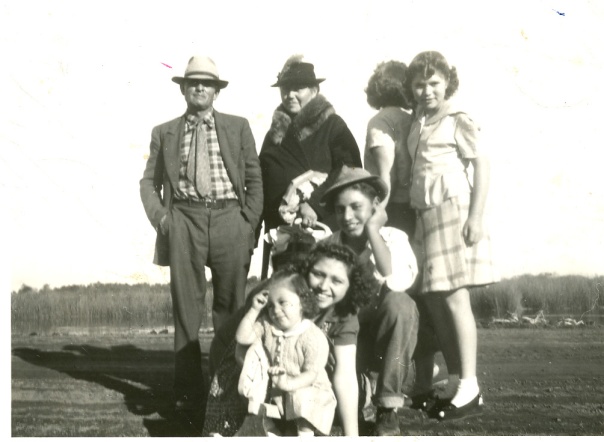 Aunt Dorothy is in front with Jeanne, my dad just behind them, then her parents and Aunt Angie. I suspect probably Viola is standing next to Aunt Angie but can’t tell for sure.

Tim and Dorothy probably the same day as the picture below.
Here is a picture of my dad Tim with Jeanne about 1944.

As our country neared World War II, President Roosevelt signed an Executive Order ordering all Japanese-Americans to evacuate the West Coast. This was on February 19, 1942, while they were living in Stockton. Uncle Sam, his siblings and Jeanne all received letters saying that would need to be relocated to internment camps. Dorothy and Margaret were not included in the letters sending them to the camps.

Dorothy would not have let her family go alone and planned to go with them, but the family had a savings grace in Roscoe Zuckerman. Roscoe Zuckerman was a farmer/rancher who lived on the Delta Islands, which were formed by the San Joaquin and Sacramento Rivers. His island, Mandeville, is where Uncle Sam worked for him.  He stepped forward and told government officials that Uncle Sam was his employee, they could all live on his island, and that he would take responsibility for his entire family. He said that they would be part of the war effort.

Here is Uncle Sam in the top row, third from the left, sitting next to my Uncle Fred.

They were very fortunate that they did not have to go to the relocation camp. They also changed their name from Miyasaki to Saiz, which was Margaret’s maiden name.

Betty Saiz, Uncle Sam’s sister, said that her mother Margaret had written to President Roosevelt and that he’d allowed them to not go to the internment camps, but I think Aunt Dorothy’s story is much likelier to have happened.

This is Uncle Sam’s brother Taki’s wedding to Lena in front of the church in Stockton.

There were no roads leading to the islands then so Aunt Dorothy, who had moved with her family out to the islands, moved back to Stockton and stayed with Tonita when she was getting ready to deliver Sharon. Otherwise, they wouldn’t have had a way to get to the hospital when Sharon was born. She arrived on August 26, 1945. 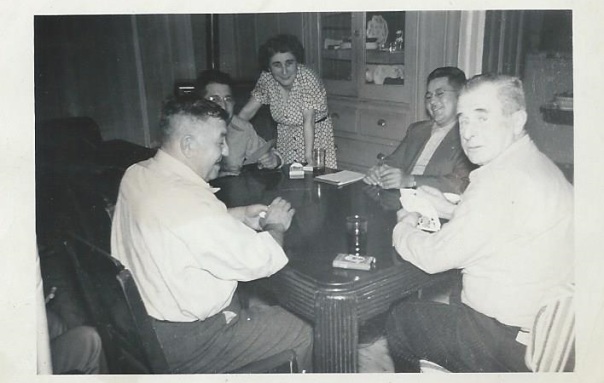 Aunt Dorothy was a pistol. She was so full of life and we probably saw her the most out of my aunts and uncles.  She wasn’t a particularly “soft” person like my mother, but you always knew where you stood with her. She never pulled a punch. After my Aunt Jean’s husband passed away, Jackie and I spent a week away from my mother and stayed half the time with Aunt Angie and the other half of the time with Aunt Dorothy. Aunt Dorothy made us eat corned beef and cabbage and Jackie was ruined for life and can’t eat that meal to this day. I think it was just that we were away from my mother, but she still blamed Aunt Dorothy for her hatred of that meal. She also made us take naps. This was the 2nd of May, 1971. I was 6 and Jackie was 10.

Like most of the Jacques’ kids, she was a voracious reader. However, her first love was the movies. She loved movies and movie stars.  Something tells me Dorothy would have been on Twitter back in the day. She would have loved the opportunity to talk to movie stars directly and to hear what they had to say as well. Well, unless it was her previous favorite movie star. John Wayne had been the one movie star she adored until it was revealed what their political affiliations were. Then he became John Wayne “the god-damn Republican”.   She was funny.

She was also a perfectionist. Her home was immaculate, her towels were impeccable. She was very particular about how she folded her towels and taught my mother how to fold them the same way. Jackie and I fold them like that to this day.

She was a slooooowwwww (I can’t accentuate that enough) eater, often the very last at the table. She liked to put her dishes in the sink then turn off the light, waking early the next day to wash them.

Her fear of mice was legendary, including stupid Mickey Mouse. She was not charmed by him in the least.

She was best friends with her sister Della. Dorothy would drive Della downtown to the movies and park at a meter. She would try and watch the time but if they happened to get a parking ticket, she would drive to the courthouse and pay the parking ticket on the way home, so that Uncle Sam wouldn’t know where she’d been.  She loved to read and collect movie star magazines. She saved every one that she bought. Later, she would send her girls to the market and they had to know which magazine was which so that she wouldn’t miss any.

Dorothy was a godparent to Tommy Martinez and here they are in 1950. 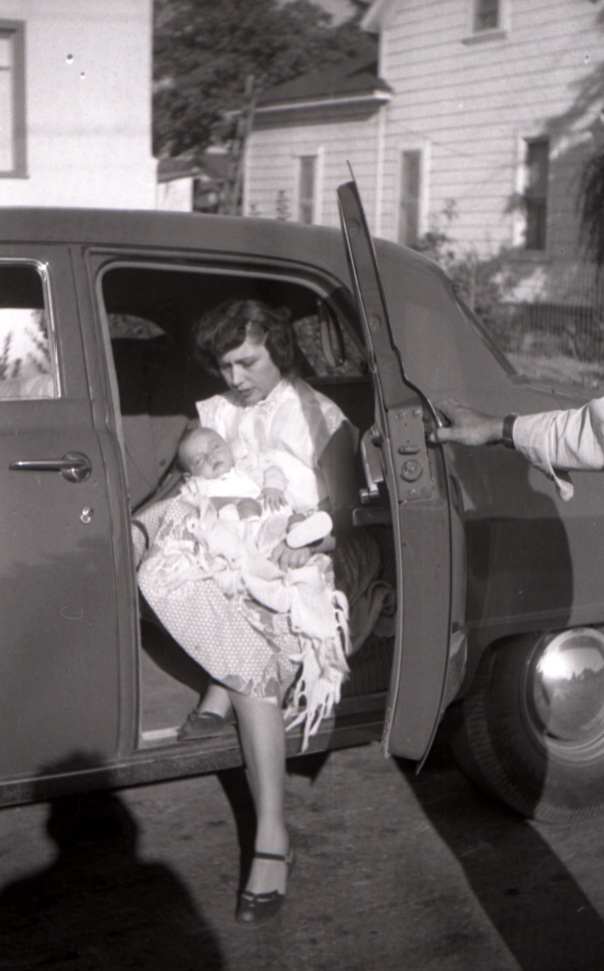 Tony Telena, Rosemary Serna, Sam, Dorothy, Angie and baby Tommy. I think the person on the right of Aunt Angie is Viola.

When Sharon was in the 3rd grade, Dorothy and Sam decided they would move to New Mexico with Fred and Alice Jacques and open a cafe. They had a large going away party.

Dorothy and Sam preparing to move to New Mexico.

Family party, preparing to send them off.

Now, Uncle Sam told Aunt Dorothy not to take all of her belongings with her because he said they would be back in California. Typically, Aunt Dorothy didn’t listen and packed lock, stock and barrel for the trip. 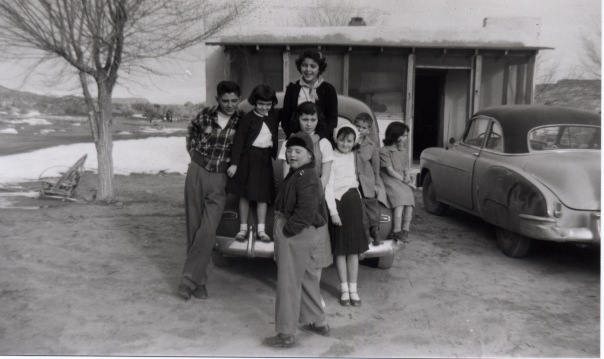 Here are the girls in New Mexico with Pearl (white hat), Ronnie and Uncle Alex’s kids.

While the girls were sent to boarding school in New Mexico, Aunt Dorothy, Uncle Fred, and Aunt Alice ran the cafe and Uncle Sam went to work to help support them.

My Aunt Dorothy loved to cuss. I can’t say the words “stupid ass” without her voice in my mind.  When my sister Cammie said that my Aunt Jean (my mother’s sister) was her favorite aunt, Aunt Dorothy said, “Yes, but I was the one that wiped your ass.”

I can’t tell you enough about her where I would think, there, I’ve said everything about her that I can say. Truthfully, there would always be more.

We spent more time with her than anyone else.

Dorothy and Sam at our house in Santa Clara. She loved to call Uncle Sam either Samuel or Viejo (Spanish for Old Man)!

Another party at our house.

My dad and Sam were great friends. Uncle Sam taught him to be a mechanic, a skill he was able to take with him into the service. They spent a lot of time together and really had a great friendship.

Here we are in Pipi, a campground north of where they lived in Pioneer. Here is Aunt Dorothy, Todd Sammons, Laurie, Me holding baby Anthony, Jeanne and my brother. 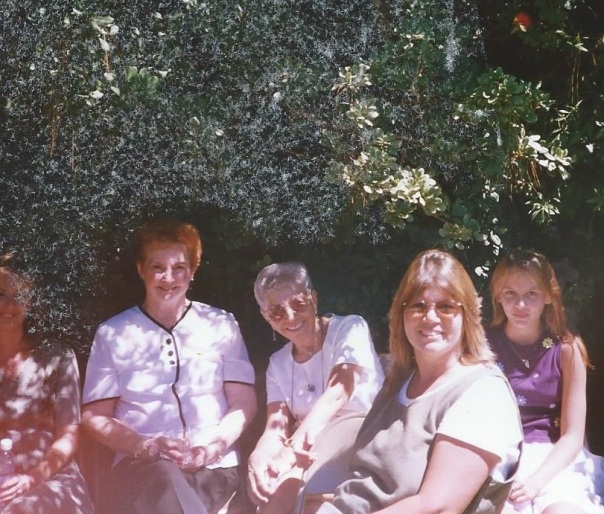 Jackie, Dad, Dorothy, Fran Jones and Rosemary Serna with her back to the camera.

Aunt Dorothy moved around a bit. She lived on Carm Avenue in San Jose where they had tons of friends in the neighborhood including the Buzz and Rita Freitas and Delores and Harley Resh. They lived in Pioneer then finally in Galt. 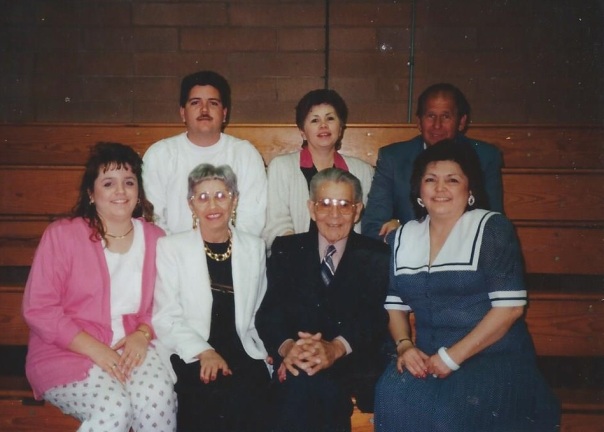 Aunt Dorothy spent a great deal of time with her grandchildren including Cindy, Tony, Scott, Todd and Stephanie. 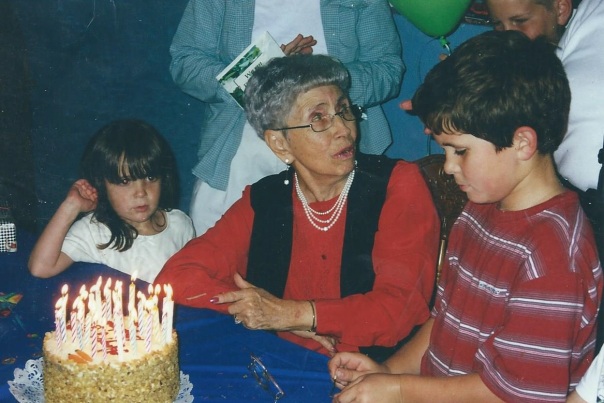 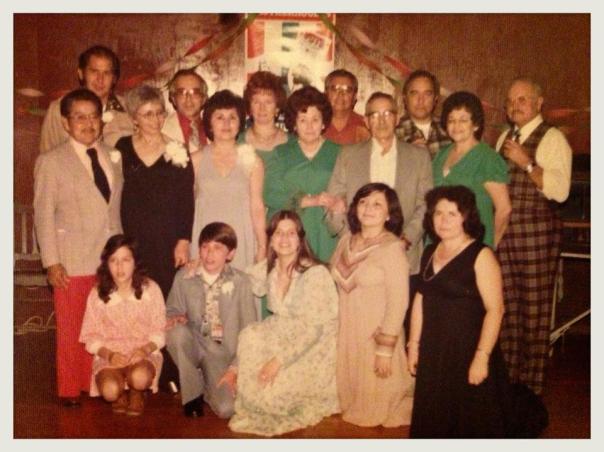 Uncle Sam at an Operating Engineer #3 summer picnic. Since both he and daddy belonged, we went to many picnics together.

Toward the end, my uncle suffered from Alzheimer’s disease. However, he still called me Cookie when he saw me. 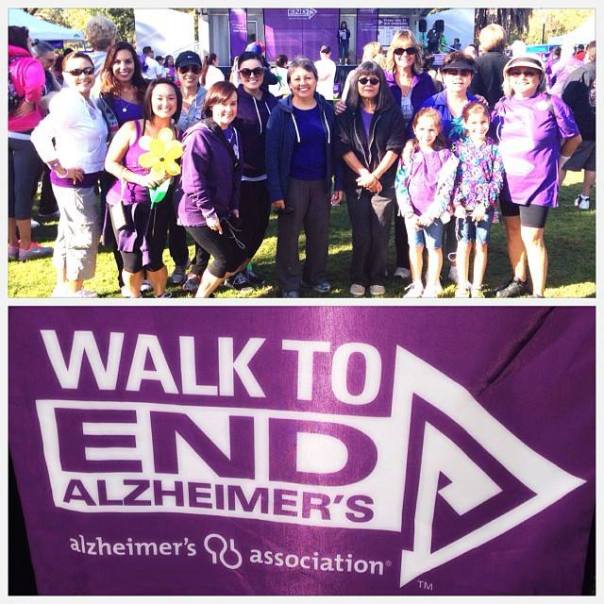 My Uncle Sam passed away on the 17th of February, 1998. His funeral was held in Lodi and he is buried at Cherokee Memorial Park in Lodi. 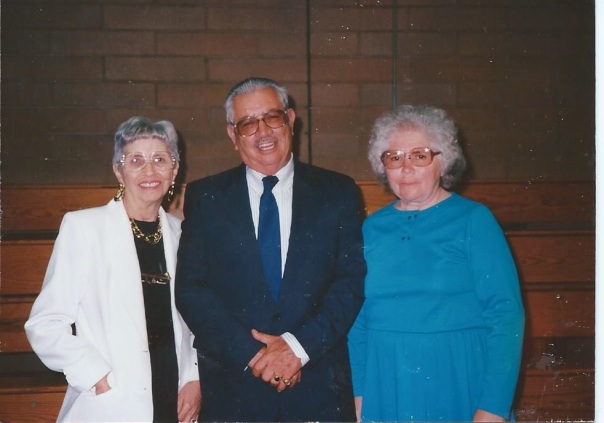 Aunt Dorothy was there when my father passed away and it was very comforting to have her there. We knew she and Aunt Angie had suffered a great loss too.

She was very clear at the end of her life. She had been in the hospital for a few days when Jackie and Tim went to see her. Her family had just left to eat dinner and she asked them both tons of questions and they had a wonderful visit. Jackie and Tim headed back to Stockton and she passed away shortly after they left her.

We were very fortunate to have her in our lives and Aunt Dorothy left a hell of a memory for us. Dorothy passed away on August 28th, 2004 and is buried in Lodi with Uncle Sam.

As soon as you told her you’d found a guy you liked, Aunt Dorothy had one question for you. Was he a good provider? That was all that she cared about: if you’d picked someone who could take care of you.  She said Uncle Sam was always a good provider. 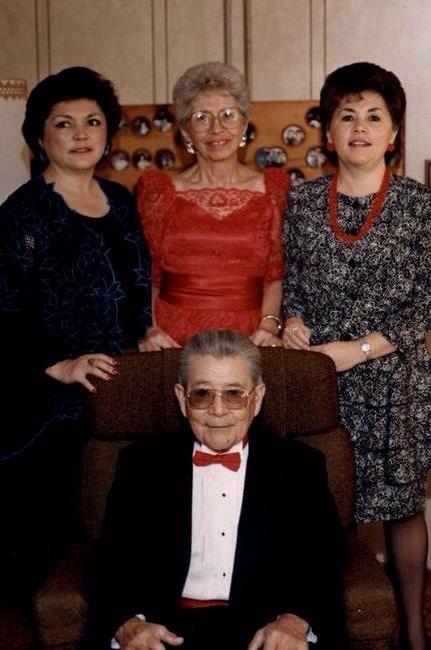 Sharon, Dorothy, Jeanne and Sam Saiz on their 50th wedding anniversary in 1989.