His father, known as RJ, was a sheep rancher and Leonard was brought up on a ranch. Aunt Mirian goes on to describe her father as charismatic, unpredictable, tender-hearted, violent, unforgiving, generous, proud and passionate.

Leonard was a larger than life character, a man of many talents and passions. He attended “North School” then graduated 8th grade and attended the University of Utah for two years until his father, RJ, showed up and asked the teacher if Leonard would be better served staying at college or coming home to the sheep ranch business. His teacher had replied that Leonard was very lucky to have a business to go to and thus Leonard ended up as a sheep rancher. He did go on a Mormon mission to the eastern United States.

Leonard loved to tell the story of how he met his wife, Mary. Leonard went to a ward party where he felt stiff and uncomfortable as he was fresh off the range and herding sheep. A slender young girl dressed in pink came and sat down by him and struck up a friendly, casual conversation. Of course, they belonged to the same ward so they knew each other by name and Marian says her mother, Mary, came from people who were genteel, long suffering, modest, accommodating, deeply religious farm folk. Marian was certain her mother was feeling sorry for her father and Leonard never forgot that evening. He wrote a poem, “Pink Lady” dedicated to Mary and he compared their meeting with two ships encountering each other “on life’s rugged ocean” and their subsequent journey together.

Leonard wrote many letters to Mary, starting in October of 1914. Aunt Mirian’s recounting includes part of his letter, “Dear friend Mary, you will be surprised to get a letter from one out on the desert lands. We are on our way to the winter range once more with the sheep. I am going to ask you if I could correspond with you this winter. Friendly letters help so much in more ways than you may well imagine, especially to one out in these circumstances. If you would consent to such a thing, I would respect you highly and appreciate your letters. Hoping that you will grant my wish and that everything is well with you, I remain your friend Leonard Bailey.”

His letters went from “Dear Friend” to “My Dear Mary” to one year later, “My Dear Girlie” and then boldly, “My Little Sweetheart.” The letters are filled with descriptions of lonely days, the rigors of camp life out with the sheep, changing seasons and finally changing hearts. 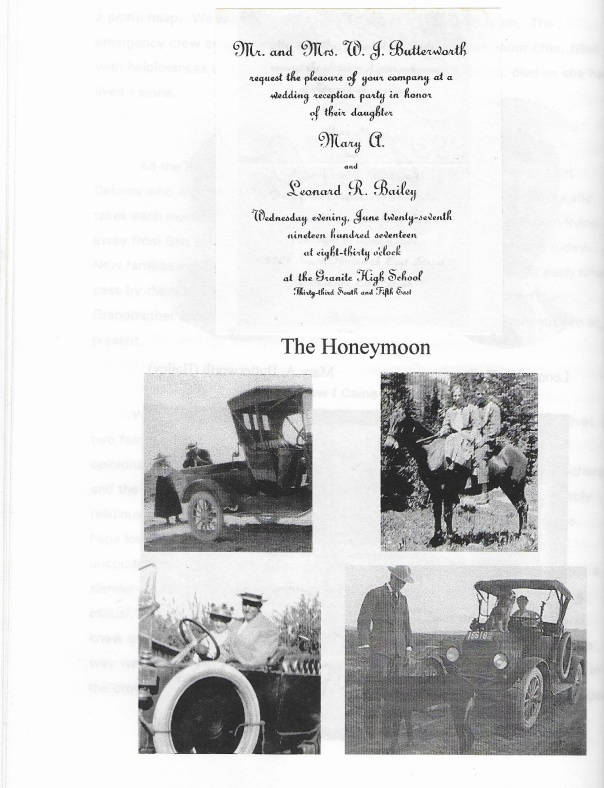 Only Leonard’s letters remained because he had periodically burned Mary’s responsive letters to keep prying eyes of the camp tenders off of the letters. They were married in the Salt Lake Temple and their reception was held at the Granite High School gymnasium on June 27, 1917.

Later in life, Leonard related to his children about his wedding night. It seems that his mother had given him a certain little self-help book for the newly to be wed young man. In it, Leonard said, the groom was counseled to be mindful of all the pre-nuptial trauma that his bride had had to deal with, parties, wedding plans, dress fittings etc., and in deference to her shattered nerves he should postpone any idea of consummating the marriage until he felt certain she was sufficiently calmed down and well rested. By the third night of their brief honeymoon, at a hotel in town, according to Leonard, Mary was in tears, her maidenly modesty prohibiting any questions as to what might be the matter and fears she had probably had about the wedding night were magnified by her groom’s apparent disinterest. Leonard would laugh at how he’d gathered Mary in his arms, trying to explain his seeming lack of ardor.

Leonard and Mary went on to have five children, (Leonard) Vaughn, Mirian, Claron, Maxine and Vayles.

Leonard was a man who would climb on the floor to play horse with his children. He had a quick mind and loved word games, mathematical tricks and story-telling. He was talented at drawing, art and poetry. He loved to sing and would sing “Oh, I am a Utah Man, Sir” with gusto in a great baritone voice.

He expected obedience from his children at all times. Lying meant real trouble, talking back was forbidden and quarreling when they were small would be punished with a spanking. He was a man who cared deeply about his children’s education and was just as likely to be in their corner as not. When his girls would go on a date, he’d tell them, “Be a lady, Tootsie.” 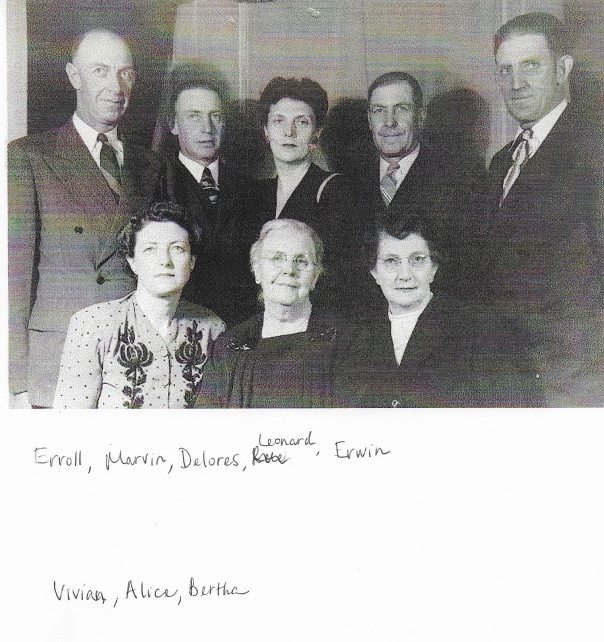 One of the stories that made me laugh was that Leonard and Mary had a pact between them. When one of the children were sick and had been vomiting, he’d be the one to clean it up as it would make Mary ill if she did. However, Mary would be the one to change every dirty diaper as Leonard couldn’t handle that. Paul and I have had the same arrangement. One day, Paul had baby Taylor at home while I was working. She had a messy diaper and Paul thought he should just cut it off her so he wouldn’t have to pull the dirty t-shirt over her head. I told him, “Don’t you dare cut that off her.” That arrangement served Paul and I well and clearly, Leonard and Mary were served equally well.

Leonard loved Christmas time and he would help twist red and green streamers of crepe paper that were hung from the light fixture in the front room. He always brought home a tree from White’s grocery and joined in on the trimming festivities. He could scarcely wait for his kids to get up on Christmas morning and if they waited too long, he’d go down the hall shouting that he was pretty sure Santa had come.

When he turned fifty, Mary arranged to have all of his poems typed up and bound into a book for his present. The book was bound in a handsome leather cover with “Poems of Fact and Fancy” in gold across the front of it. Leonard was ecstatic with his gift. 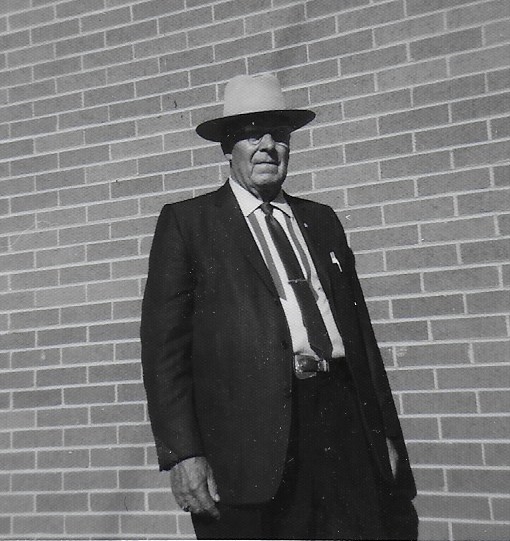 Leonard’s ranching days went through a difficult time and at times there was hardly enough money to keep one going. He never owned a car until 1951, when most of his children were married. He bought Maxine a new 1951 Chevrolet for her to drive back and forth to work when she began teaching school.

One of Leonard’s poems entitled, “To The Pioneers” was read into the Congressional Record in Washington, D.C. during the inauguration of the Bringham Young Statue in the Capitol rotunda. He was so proud of that accomplishment. 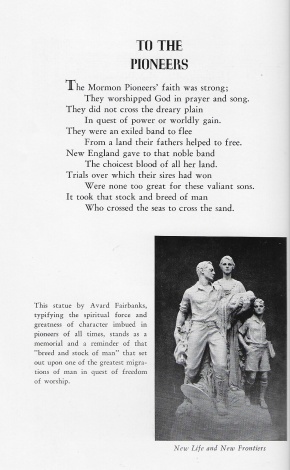 In 1954, Leonard suffered a serious accident at the Utah Oil plant where he worked. A huge scaffolding fell in a high wind and struck his shoulder, transmitting the shock through his body to his right knee. It was completely shattered.

Mary Bailey passed away in 1963. Leonard continued to live alone, ever stubborn and insistent on living his own way. His children would take turns having him to dinner. Some time after his wife died, he was crossing the road to visit a neighbor when he was hit by a speeding car. He was forced to stay with Mirian’s family for a year while he convalesced. He was a model patient and very pleasant the entire time he was there. One day, Mirian looked out the window to see her father using his walker to slowly make his way down the road. Mirian ran out and said, “Papa, what are you doing?” and he replied, “I just wanted to go home for a little while.” He was so independent he just couldn’t wait to get back to his own home.

One of Leonard’s favorite pranks to play on an unsuspecting child was to ask, “How do you spell your name, my boy?” and after the young man had replied with spelling his name, Leonard would respond with, “I would spell it Y-O-U-R-N-A-M-E”. I can remember Maxine asking the same question lol.

In 1979, Leonard was 89 years old when Marian walked in to find her father sitting in his chair, partially clothed and unable to speak. He’d had a stroke and was taken to the hospital then sent to a rehabilitation hospital. He recovered some of his speech, but it was clear he was living somewhere else. He’d say, “My, Toots, just look at those horses coming through the door.”

Maxine left a letter, describing her father’s funeral. She said 286 people signed the register. Vayles offered the family prayer. Leonard lay in his casket in his temple clothing, looking serene. The Bishop spoke of Leonard as a valiant and strong son whom Heavenly Father sent to earth nearly 90 years ago. He said Leonard had poked lots of Deacons with his cane, and made no bones about protesting what he thought was error or injustice. One of the injustices Leonard thought was of the church itself. They would have funerals in the chapel and the descendant’s body would be wheeled to the front and would have to leave down the same aisle. Leonard felt that wasn’t right and railed to have a door installed in the back of the church, for the body to be removed through. After some time, the door was finally installed, and the Bishop said it was the Leonard Bailey door and would be called such, forevermore. Leonard Bailey was wheeled through the Leonard Bailey door, to be laid to rest at Wasatch Lawn Memorial Park.