The 1990’s arrived and found my parents in a new town. They had moved to a retirement community, just south of Red Bluff, CA and east of Corning, CA. Corning was the area where Mother had moved to as a child in mid-1930. Rancho Tehama was down a very long 10 mile drive off Interstate 5, then past a cow pasture and up into the foothills. The houses were mostly mobile homes and Mom’s property had about a half-acre of land, on a hillside.  Their home had two bedrooms and a built in hot tub. There was one bathroom. 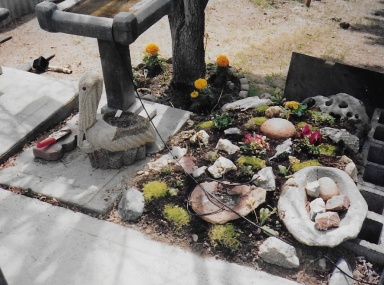 One of the consequences of our parents moving was Aunt Jackie moving into her own apartment. With our parents gone, her apartment was very close to our duplex and thus she came to our house all the time. We all traveled to Mom’s a lot.

In fact, when I was very pregnant with Taylor, about 8 months, we’d driven to Rancho Tehama for the weekend and traveled with Aunt Jackie. She was driving my car back, Paul was in the front seat and I was laying in the back seat (I wasn’t feeling great). We had our windshield busted out by a bird. It was very scary. We pulled over on the median and then I drove home the rest of the way, busted windshield and all. 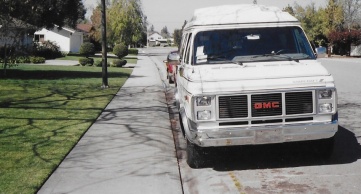 We’d arrive on Friday night at 10 p.m., as we left when Paul got home from work at 7 p.m.  Mother would be in bed already and Daddy would be up watching t.v. but really he was waiting for us to arrive. Momma would come out to say a quick hi then straight back to bed. We’d get up on Saturday and they’d make a huge breakfast about 11. By the afternoon, I’d be playing Scrabble with my parents. The house smelled of cigars, as Daddy smoked his cigar while playing at the table.

For dinner, they’d make steaks marinated in olive oil and garlic. The smell of the barbeque always made your mouth water. There were twice baked potatoes and garlic bread. They were such great cooks. 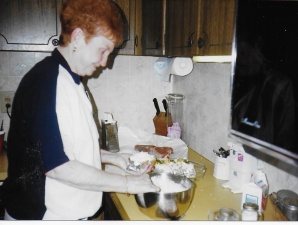 By Sunday, we’d run to Red Bluff to grocery shop. I loved that little town. It was very quaint.  That was really when Walmart became a big box store and we’d shop at the one in Red Bluff because it was the only place in town to get what you needed. On the Fourth of July, we’d go to town for the fireworks display. The whole town showed up and the fireworks were shot over a pond. There was only one movie theater and we’d go there during the summer.

Mom and dad had a huge satellite dish, in order to get all of the television channels that they wanted to watch.

Daddy planted vegetables and fruit, along with tulips. My dad planted flowers at every home they lived in.

My parents started traveling. The year Tara was five and Eddie three, my parents had taken them to Disneyland. I got to go on that trip as the teenager so that I could take them on the rides. This time, in the early 1990’s, my parents had purchased a van and took all five of their grandchildren to Disneyland. Tara was 15, Jim was 14, Eddie was 13, and Anthony and Nick were both 10. They had such a great trip. Of course, Nick and Tara fought the entire trip. It happens.

The 1990’s is the decade my parents took a trip back east. Mother had been wanting to travel so they got in their van and drove from California to New York to view the autumn colors. They stopped at my cousin Dickie’s house in New York. My parents got the biggest kick out of that visit. Dickie took them to where he worked in the Senate, and they were very impressed. They thought Lorraine and the kids were great. But mostly, my dad was so damn proud of Dickie and he knew his brother Epie would have been so damn proud of him too.

They also took an Alaskan Cruise. They absolutely loved Ketchikan, Alaska.  They were very impressed with all of the ice and of course, made wonderful cruise friends. That’s how my parents were, they could make friends anywhere, with anyone. 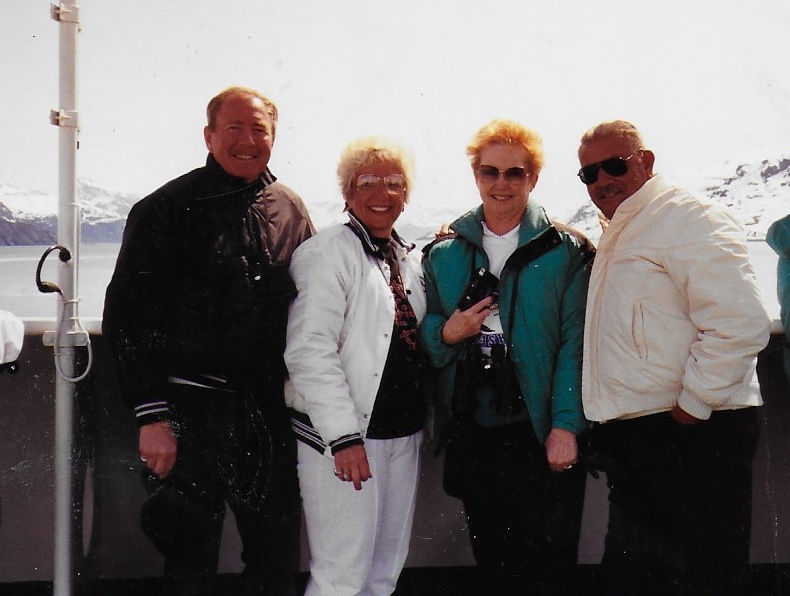 They also took a trip to Alabama along with my Aunt Kay and my cousin Cynthia Paulson. They visited with all of my Grandpa Hardin’s relatives and my mother was happy to meet so many cousins. Most of them were redheads and Mother fit right in.

Lenny Holmes, Cindy Wilkinson, Kay Paulson, Tim and Jubie and all that is left of the fireplace where Charles Hardin was raised in Alabama 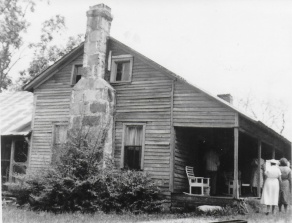 House as it was when Charles Hardin lived in Falkville,AL

They also took a cruise with Aunt Fran and Uncle Don. They were the best of friends and just had such a fantastic trip together. Of course, when Mother traveled, (prior to everyone carrying a cell phone) I would go for days without hearing from her and it would drive me crazy. It drives me crazy now, not being able to call Momma. In Dad’s video, you can hear Uncle Don say, “Jubie, phone’s for you. Cookie’s calling you again”. Hahaha. That video made me laugh. As much as it makes me cry, it makes me laugh too. Yes, I’d called Uncle Don like seven times while Mom and Aunt Fran were shopping. I might have been a bit impatient.  And Uncle Don loved me.

We also made more than a few trips to New Mexico. The first, when Taylor was just 6 months old. Here she is at the Grand Canyon on our way home.

The next New Mexico trip was in 1996, when Taylor was four. Tim, Jackie and Paul and I along with Taylor, Cammie, Jim and Nick met up with Mom and Dad. They’d driven with Eddie. It was a great trip.

For as much as they loved living in Rancho Tehama, Momma kept her doctors in Stockton. Consequently, she would come back to Stockton every time she had a doctor visit, so in between our trips up there, they’d come back and stay a day or two at a time.

When I was pregnant with Taylor, Momma and Daddy came and stayed for about a week, driving us to the hospital. I went into the hospital and my Mom and Dad took your dad out to dinner. I was perturbed, to say the least. I thought it very unfair that I was laboring away and my parents decided he needed to go eat. Haha, makes me laugh to think of it now. With the pain my mother had, I knew it was very difficult for her to sit at the hospital hour after hour with me. Part way through the night, she had to leave for a few hours but Maxine stayed with me. See, Momma was very happy that Maxine was strong and resilient and able to sit for the long hours my mother couldn’t.
After an emergency C-section, my Mom and my Mother in law were outside of the nursery window, waiting for Taylor to be brought out, along with your aunts, and they both started screaming and jumping up and down when Paul came out with that baby. Paul couldn’t figure out how they knew it was a girl but that pink knit hat had given it away. Gosh, they were so happy. Taylor was the first Bennett granddaughter (followed by Lauren, then Hailey) and the second for my mom and dad. They took us home from the hospital, too. Mother let my dog, Buddy, smell that new baby, then told him that she was ours. Buddy was a very good dog and the only time he misbehaved was licking Cheerios off Taylor’s fingers. 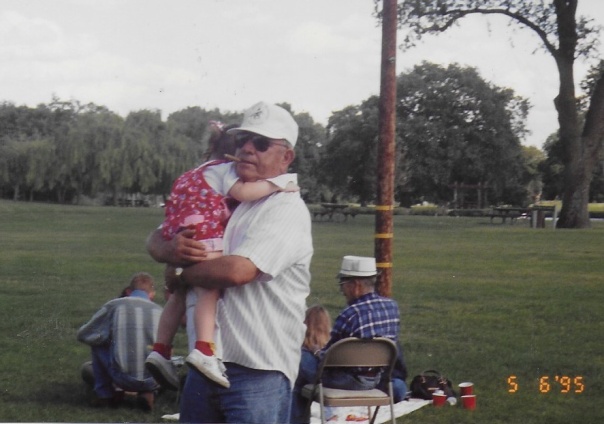 Mom and Dad had a good run living in Rancho Tehama.

Jim and Stefanie got married on December 28, 1997 in Monterey, CA and then had a church wedding on November 28, 1998. Taylor was the flower girl in each of these weddings.

Eddie was supposed to be in Jim’s wedding but Eddie had enlisted in the U.S. Army and thus missed the service. Anthony filled in for his brother.

These were the last big events my parents were to participate in.

The one event that crystallized our family life in the 1990’s was the year we all celebrated Christmas at my mom’s house. I don’t think Jacques was born yet, but every member of our family was present. Usually there would be someone missing from a holiday, but that Christmas, each and every one of us was present.  All nineteen of us, under one roof. And yes, one bathroom. That was a hell of a holiday. My mother was so damn happy. We sang songs, ate Christmas dinner, opened gifts, it was every holiday movie rolled into one, much to my mother’s delight. There were people sleeping in every room. Mother had the kids make Christmas lists for her and then she purchased every single item on the list. She said she needed to spoil them while she could. 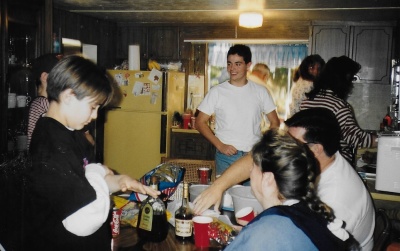 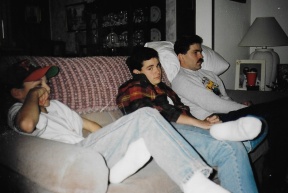 In the last three years of the 1990’s, Mother’s health really deteriorated. She had a new tumor and we found that the cancer was active again and had spread to her brain. She was 69 years old and was coming up on a big birthday. By the new decade, she would be turning 70 years old. I had another  great brainstorm…we should throw Momma a big bash for her birthday. It was going to be a surprise party and I had her invitations designed. Unfortunately, the party was never meant to be. 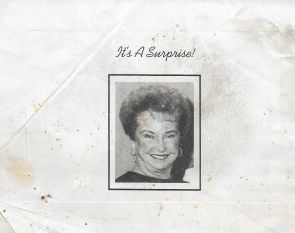 The turn of the new century was kind of weird. Everyone thought that the whole Y2K thing was real, that at midnight, all of our computers would explode, that the internet would self-destruct and that time would stand still. It didn’t. Paul and I went to dinner on New Years Eve with Momma and Daddy at Stockton Joe’s. Then we picked up the kids and took them back home. But in a way, time did stop for us. Momma had brain surgery, trying to eradicate the cancer. It didn’t work. She and Dad had been forced to sell their home in Rancho Tehama and move back to Stockton. We spent our last Christmas together, as a family, in a small rental home here in Stockton on East Benjamin Holt Drive.

I hung all of her lovely decorations and then tinsel, strand by strand. We tried to make it the best Christmas we could. But there was a pall in the air, one that we couldn’t run from, couldn’t hide from, one that would change us forever.