Well a new year has arrived. 2017…Here is to good times with family, good days ahead and good stories.

When we left off with Bill and Bea, they were living in Canada and had at last adopted Miriam and had a very fine little family.
Lloyd worked after school during high school, making $25 a month. When they had finished building their home, Lloyd didn’t want Bea to put her old coal stove into the new kitchen that had been built so he gave her $100 toward buying a new stove.

When the time came for Lloyd to go off to college, he was accepted at the University of Utah in Salt Lake City. Bea took in sewing to help pay for Lloyd’s schooling. Finally, on very short funds, Bill sold his violin to help pay for college. Bea cried over that for years but when Lloyd and Maxine were long married, they purchased a new violin to replace it.

Lloyd had been gone to college for a bit when a woman came to see Bea. She didn’t know her but the woman was from Simpson Sears Mail Order Office and she said she had heard of Bea and wanted her to come work at their office.

She and Bill had difficult times in their marriage but the one thing they agreed on was providing an education for their children. She went to work there and Bill was working for the Cahoon Hotel…(spoiler alert, Aunt Miriam married Golden Cahoon).

In 1953, she and Bill wrote to her parents and asked them to come back and live with them for a year. She and Bill sent tickets to them and they arrived in Christmas. It had been a long time since she had seen her parents. It happened that Lloyd graduated from the University of Utah while they were visiting so they were able to attend. After Lloyd’s graduation, they drove her parents to the Grand Canyon then to Knotts Berry Farm and other places in California before driving Lloyd and Maxine back to Salt Lake. Her parents really enjoyed that vacation and after they left the Grand Canyon, her father said, “We are having a millionaires holiday, mom, and it isn’t costing us a penny.” 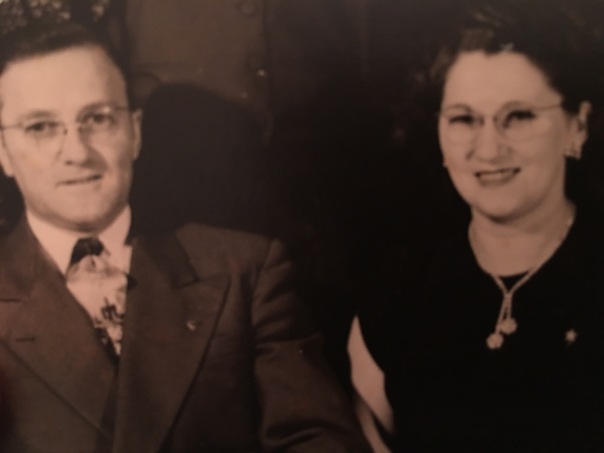 They returned with her parents to Salt Lake that August as Lloyd and Maxine were getting married. They were very happy to be at their oldest grandchild’s wedding.

Daughter Miriam also had her first child during that trip so they were here in time to see Wendy born in March of 1954 (sorry to out your age, my dear, hahaha). Bea was the first person to hold Wendy after the doctor. Her parents returned home to England and their life settled into a normal routine once again.

Eventually, Darlene, their youngest, became unhappy in Canada and she went to Salt Lake, lived with Lloyd and Maxine and went to high school there. She went back to Canada but was itching to finish school in Utah. In 1956, Bill got the idea of moving to Salt Lake, too, and was very serious about it. Bea wasn’t keen on starting over. However, she finally told Bill that if he was able to sell their home, she would consider it. She really didn’t believe that would happen. Their home sold in the fall of 1956 and Bill went to Salt Lake first, to look for a job and to get them settled. Bill went to the Board of Education and got a job and purchased a house for them. Bea wasn’t happy and she sure didn’t like that house one bit. Darlene’s friend had gotten permission to move with them to Salt Lake. Bea went back to Canada for a bit, then asked her employer to hold her job for her while she decided if she really wanted to go to Salt Lake.  They moved to Salt Lake for good and Bea set out to make that tiny house her home.

Darlene got married in 1959 to Henry Watkins then Bea left that night for England to see her siblings. It had been so many years since she had seen them and missed them terribly. This was the first time she had flown in a plane. She was very nervous but really loved it.

While there, she was able to return to her folks in Northampton, able to see her Aunt Poll who was in a nursing home by this time, saw her Uncle Sid and Aunt Frances and her dear friend Betty Cook Wilson who now lived in Gloucester.

Bea was walking with her parents by the railroad station when she asked her father if he had ever been to Wales, where his family originated. He said he hadn’t. She told him, “Well, today is the day.” She bought them three tickets to Abergavenney, Wales. It was a lovely valley, hilly and so beautiful. Bea asked her father if he knew anything about his family, but he said he only knew that his grandmother was named Phoebe and nothing else.

They found a place to stay for the night then visited the old church of St. Mary. When they arrived at the church, the organist was playing, “Praise My Soul The King of Heaven” and the sun was shinning. Her father said, “Girlie, I wish I could tell you something about my family but I only know that my grandfather, Emanuel Jackson married Phoebe but that was it.” As they stood there looking down the aisle where his grandparents had been married, a book fell open and there on the right side of the book were the names of his grandparents, along with the year they were married and the names of the witnesses to their marriage. 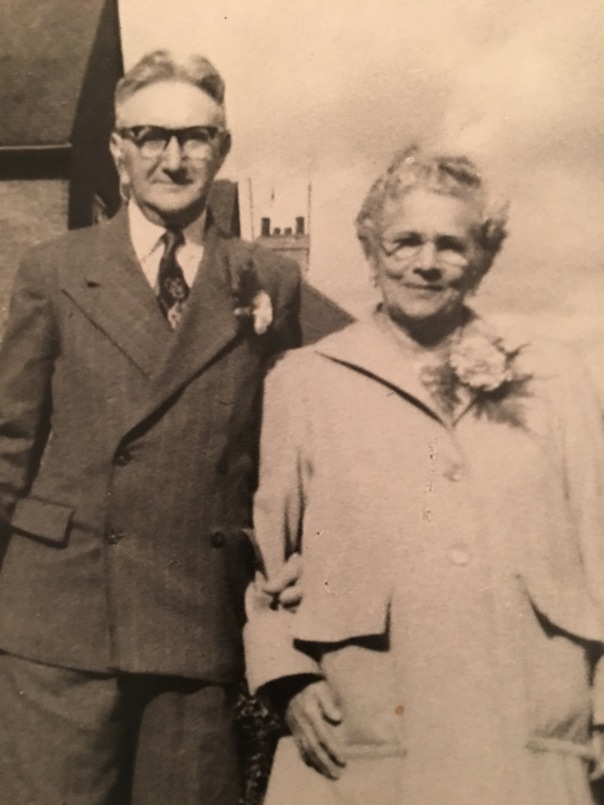 They walked over to Mill Street and found the house that her great-grandparents had lived in and where her grandfather was born. They went up to an old castle which was mostly in ruins. There was a ceremony going on and when she found out it was for a Mr. Jackson and that he was a Freeman of the Borough (Okay, Yvonne again. So, I am unclear on reading Grandma Bea’s words if, in fact, it was a direct relative or not but that is how it goes.)

She finally returned to Salt Lake after the most wonderful trip home. Bill was waiting for her at the bottom of the plane steps. She was glad to be home.

Bill and Bea lived happily in Salt Lake until about 1991 when they moved to Stockton. Lloyd had the annex turned into a room for them as he knew Bill’s health wasn’t great and that he couldn’t have Bea there taking care of Bill alone. Bill died on December 2, 1992. Taylor was just two months old and we all traveled back to Salt Lake for his funeral. Miriam Bennett Cahoon suffered from ALS and had died on August 8, 1973. She is buried in Cardston, Alberta, Canada. Darlene and her family arrived for Grandpa Bennett’s funeral, as did his Canadian grandchildren. A couple of nights after the funeral, Paul and I went with his cousin Rodney, Darlene’s only son, and his wife out for a few hours. My mother in law kept Taylor and Aunt Darlene kept Rodney’s little boy who was about two. Cousin Bill had driven us downtown and when he returned for us, he said, “Boy, your baby has been crying since you left.” I kinda freaked out and said, “My baby?” (Taylor was a good infant and I was so shocked) and he said, “No, theirs.” Turns out poor Darlene’s grandchild didn’t appreciate being left. That Taylor Bennett, however, was a trooper. Good as gold, her Grandma Maxine said.

Grandma Bea moved back to Stockton for good. Her Salt Lake home was sold and she lived with Lloyd and Maxine. My children all got to know her well. I spent many hours with her. One time, I took her and Grandma Maxine (after Lloyd had passed away) to a Thanksgiving dinner in San Francisco at my brother’s home. It was a really great night. I would take her shopping and to lunch and we would talk. She would tell me stories of her life and especially about her baby that she had lost. She still mourned his loss after all that time. In her ancestry book, she pasted a picture of Paul in the place where his picture would have been. She had nothing to remember him by, just his memory.

On December 18, 2005, Beatrice Mary Jackson Bennett, at the age of 96, went home to the people that missed her the most: her husband Bill, her parents Harry and Bea Jackson and her sons Lloyd Bennett, Baby Boy Bennett and her dear daughter Miriam.